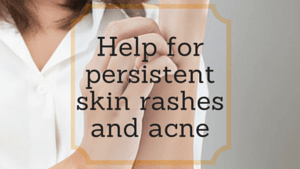 Have you ever considered that the rash on your skin might be related to stress?  I have found that stress is the primary contributor to rashes and acne and once dealt with, skin irritation simply disappears.

Let’s look at some real life situations where I have used stress management techniques to release stress eliminating rashes and acne (client names have been changed to protect their identity).

The first case involves a middle aged man named John with acute eczema.  He was on a healthy diet with no health issues.  He broke out in a rash that was treated with steroid shots and homeopathy.  A year later the rash returned and did not respond to homeopathy from his homeopath or steroid shots from his doctor.  The rash was diagnosed as Psoriasiform Spongiotic Dermatitis more commonly known as acute eczema.  It started on his legs and moved up to his waist and then covered his body.  It was very itchy causing a great deal of discomfort.  He was unable to do yard work, swim or spend time outside during the summer as all of these activities made the itching worse.  Long car rides were especially uncomfortable for him and he was not sleeping well.

Over the course of six weeks, I worked with John to release emotions related to a strained relationship with his mother and his elderly father’s health issues.   He was very worried about the loss of his relationship with his father and the tension that his mother’s behavior created in his wife and children.  The rash started to clear after four weeks and was gone after six weeks.  A few weeks later, it flared back up after a phone call with his mother but we quickly released the negative emotions that were triggered and it resolved again.

John is feeling better overall about his relationship with his parents and especially his father’s health.  His wife is happy to see him less reactive to his mother’s erratic behavior which in turn makes him feel better. 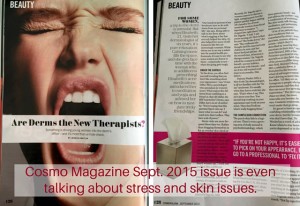 The second case demonstrates how the very upsetting condition of acne can be improved by releasing stress.  Nathan is 24 years old and had acne on his face and back that started in high school around age 15.  After releasing stress from just two incidents from his past, the acne on his face started to clear.  A third release completely cleared the acne on his face.  A couple more and the acne on his back cleared as well.  Most of the stress that created the physical condition of acne for Nathan was related to feelings of despair, apathy and feeling flawed that were concentrated around the age of 15.  I have worked with other clients to release the stress associated with acne and some see their acne clear in as little as one session while others may have a lot more underlying stress and need more time.

The third case is about a 39 year old woman named Stacy.  She developedpsoriasis at about 10 years of age when her family moved from one state to another.  It appeared on her scalp and then later on her elbows.   She had it on and off until I started working with her at the age of 39.  When I first met her, she was using a prescription cream every two weeks or so to control the rash on her elbows.  It would flare up with increased stress at work and at home.

Over the course of six sessions, I helped her to release emotions related to anger and frustration that she experienced just before and after her family moved.   The first day at her new school was very stressful and left her feeling insecure.   These emotions were triggered by a sometimes tense relationship with her husband and a few work related issues.  After releasing all of these issues, the psoriasis cleared and has not returned.  Stacy’s relationship with her husband has improved as well!

Reducing stress through energy techniques is easy and creates lasting change in my clients.  This applies to rashes as well as mental, emotional, behavioral and other physical conditions.